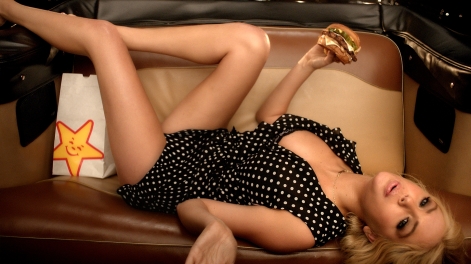 I have always been repulsed by most advertisements. They are almost insulting the way they pander to the most feeble minded individuals. I have come to realize that they do this because that is the majority of the population. How depressing that was to figure out. To make things worse, these advertisements are particularly insulting and infuriating to vegans.

I am so fed up with fast food restaurants putting attractive, skinny little girls in their commercials. It makes my blood boil. Are men really that easy to fool? *Subliminal Message* Sexy women will want you if you eat this disgusting greasy poison food! Really? Not only do women not want a man who is overweight, unhealthy, and irresponsible (which is pretty likely if you are eating such horrid foods), those women are certainly not eating such junk! I think it is about time that this is put under the category of false advertising.

Not only is this type of advertisement downright ridiculous, it is also very offensive to women and animal rights activists everywhere! There is nothing “sexy” about the torture, confinement, and murder of millions of animals. What makes it worse is that they are killing these animals only to create further harm to all that consume these products. The people that create, participate in, and enjoy these commercials disgust me.

The latest Arby’s commercial is not much better. They may not degrade women, but they do strongly promote the idea that meat is “manly”. There is absolutely nothing tough or alluring about sentencing innocent, peaceful creatures to death for your own unhealthy pleasures. It is sickening. This only solidifies the idea in the minds of men that Veganism is for women and weaklings. And I am pretty damn tired of there being so many less men who would even consider Veganism for this idiotic reason. A real man would be kind to those that are weaker than him. A real man is secure enough in his own masculinity to know that what you eat doesn’t define you. A real man protects the innocent. He doesn’t exploit them.

Sorry about the rant. Stay peaceful, my loves. ❤