Look, I know I’m quite terrible at making consistent posts and not vanishing for months (or years) at a time, but I have some incredible news to share with you all: I love myself!

That’s right, I’ve finally stopped feeding the wolf of self-doubt and harsh criticism in my head. Surprisingly enough, this transformation began after what most would view as a devastating blow in anyone’s life. This past fall I had finally managed to find myself a polyamorous relationship with two incredible vegans in my area. There were definitely some ups and downs but overall I was thrilled to finally be living my truth I thought I would never be able to.

Then my life decided to take an even more surprising turn.  My ex-boyfriend reemerged on all of his previously inactive social media accounts and began liking my posts. I felt like my heart was ignited. With nervous anticipation I decided to message him, and he replied! It felt as though no time had passed at all. I felt like an old friend had been brought back from the dead. We made plans to get together and for what may have been the first time in my life I actually wept with joy. I found myself thanking breathlessly a god that I no longer believe in. The feeling that took hold of me that day remains poignant in my heart.

With some reluctance, I began to distance myself for my polyamorous pair. Although my ex said he didn’t mind, a part of me knew that he would only stick around for so long if I continued my polyamourous lifestyle. Within a few days, we were living together. It felt like a dream to finally have my own home and someone to share it with. We were really soul mates it seems. The kind I never believed in. He had come back to me after all those years apart, and I had never been more sure of anything than I was of my love for him.

However, to my shock and chagrin, a few days after New Year’s he decided to leave. When he first told me I genuinely thought that he was joking. But as I glanced around the room I noticed that all of his things were already missing. I felt myself implode and remained silent and tearfully motionless for nearly an hour before finding the strength to speak. I knew I could not change this. I cradled it in my heart like a red giant about to burst into a black hole.

After all the times I had felt as if my world were crumbling at my sides, this was somehow different. I truly felt like there was no avoiding it this time. I fearfully began to lean into it, and somehow I found myself there with open arms and boundless love. I was so tired of being afraid I would never be loved. So suddenly the thought of loving myself didn’t seem so pathetic (or maybe it still did, but I just didn’t care). It was such a comfort to know that I could be there for myself, that that could be enough.

Now, don’t get me wrong, I cried A LOT. I still do from time to time when I think of those few months. But ultimately what I took away from those dark days is that I am all that I will ever truly have control of and that I will never leave me. It taught me that altering the connections the neurons create in my brain really is possible. I saw how much my lonely years of meditation and yoga had already helped me without me even realizing it. These practices had carried me to another heartbreak and gave me the power to step away from the pain this time and choose something different. How strange that something so heartbreaking would transform into something unimaginably empowering.

Since that day he left, things have only gotten better and better. I have been focusing my energy on bettering myself but not for other people like I used to. Now my progress is gentle and enjoyable because it is an act of love for myself. Each day, no matter how structurally similar to the last, holds worthwhile experiences and possibilities, and I am no longer waiting for something or someone to save me, for my life to change. I can’t help but smile when I realize all those corny quotes the depressed, dramatic teen in me was so quick to dismiss were always true. You do have to love yourself before you can love someone else. Happiness is a conscious choice to be made, not a state to acquire through external means. It just takes some practice, and I hope this will give some the courage to keep trying. Our mind, our disposition, is ours to create. Craft it with love. 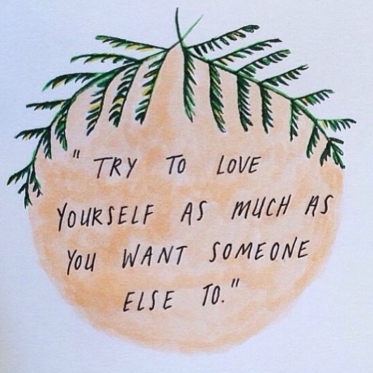